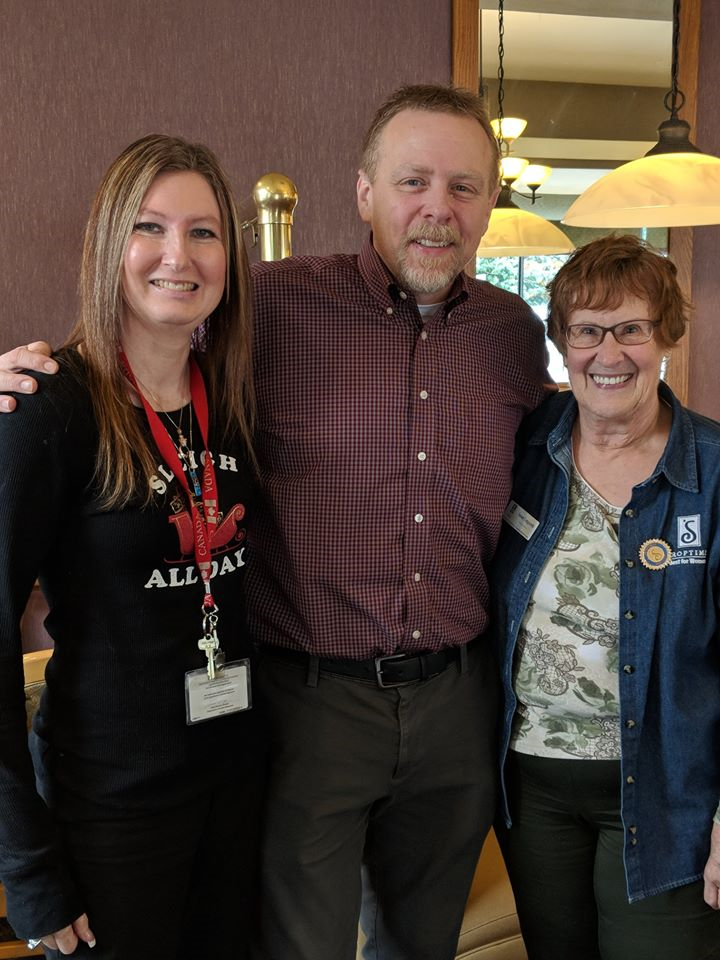 On January 14, 2020, we had the pleasure of hosting a program meeting featuring Shannon Porter and David Hawkins from Kitsap County Girls Court. We very much enjoyed learning more about this new program that launched middle of last year and provides therapeutic services to girls on probation in Kitsap County. Picture here (L-R) Shannon Porter, David Hawkins, and SIGB President Sue Longstreth.

Do you shop at Amazon.com?
If so, you can now support Soroptimist of Greater Bremerton Area while shopping.
Click the banner below to learn more!

A Message From Our President

Breast Cancer Awareness:  What really strikes me about my own personal knowledge of breast cancer is how far we have come regarding awareness and early diagnosis of this killer over the last 70 years.  In 1958, it was literally a death sentence. The mother of my neighbor and best friend was diagnosed with it in the Spring and died within a few months. She was a second mother to the neighborhood kids and the loss was devastating. In the 1970's I was a Respiratory Therapist in a large hospital where we did major surgery. Part of my job was to give breathing treatments and exercises to women recovering from radical mastectomies--the only option at that time. Most patients were hospitalized 10-14 days. The surgery was horribly disfiguring and early diagnosis was rare.

Fast forward to the 21st century, where self-checking our own breasts and routine mammograms are fairly common.  Because of this, by 2012 there were 1.7 million new breast cancer diagnoses a year. By 2018, that number increased to 2.08 million new diagnoses. We have Soroptimist Sisters, colleagues, friends and relatives who are breast cancer survivors. We absolutely know the value of early diagnosis for a positive recovery.  Keep checking yourself and get that mammogram when the doctors recommend it!! And as Roxane says "Arrest Breast Cancer".

Founded in 1944, our club is part of a global volunteer organization that provides women and girls with access to the education and training they need to achieve economic empowerment.

The name, Soroptimist, means "best for women", and that's what we strive to achieve. Soroptimists are women at their best, working to help other women and girls to be their best.

We cordially invite you to attend a special ZOOM event and program meeting – “Dead Feminists” Meet the Authors -- on Tuesday, March 30, 2021 at 5:30 p.m. Dead Feminists is a book about both ordinary and extraordinary women who have made significant differences throughout history. We are so excited to welcome authors Chandler O’Leary and Jessica Spring and for all of you to meet them and hear more about their book.

Due to COVID-19 all meetings are currently being held via ZOOM. Please see below and check back often for updates on upcoming speakers at our monthly program meetings.

Thank you for your understanding and for sticking with us! We look forward to seeing you at one of our upcoming meetings.

In these difficult times we are focused on protecting ourselves, our families and our communities from the spread of the coronavirus (COVID-19). As such, all face-to-face meetings and planned social gatherings are on hold. Please check our website or social media pages for updates. Be safe! Be well! Thank you!

We Appreciate Your Support

In addition to member dues and our fundraising efforts, we rely solely on support from our members, friends, and the general public to help us fund programs and projects having a significant, positive impact on the lives of women and girls in our community. Your voluntary, tax-deductible contribution is greatly appreciated. You may visit our Support Page or use the PayPal "Donate" button below. Thank you for your consideration.

Soroptimist International of Greater Bremerton Area is a charitable, not-for-profit organization exempt from Federal income tax under section 501(c)3 of the
Internal Revenue Code. As such, all contributions to the organization are fullty tax deductible to the extent allowed by law. Please consult a tax adviser.